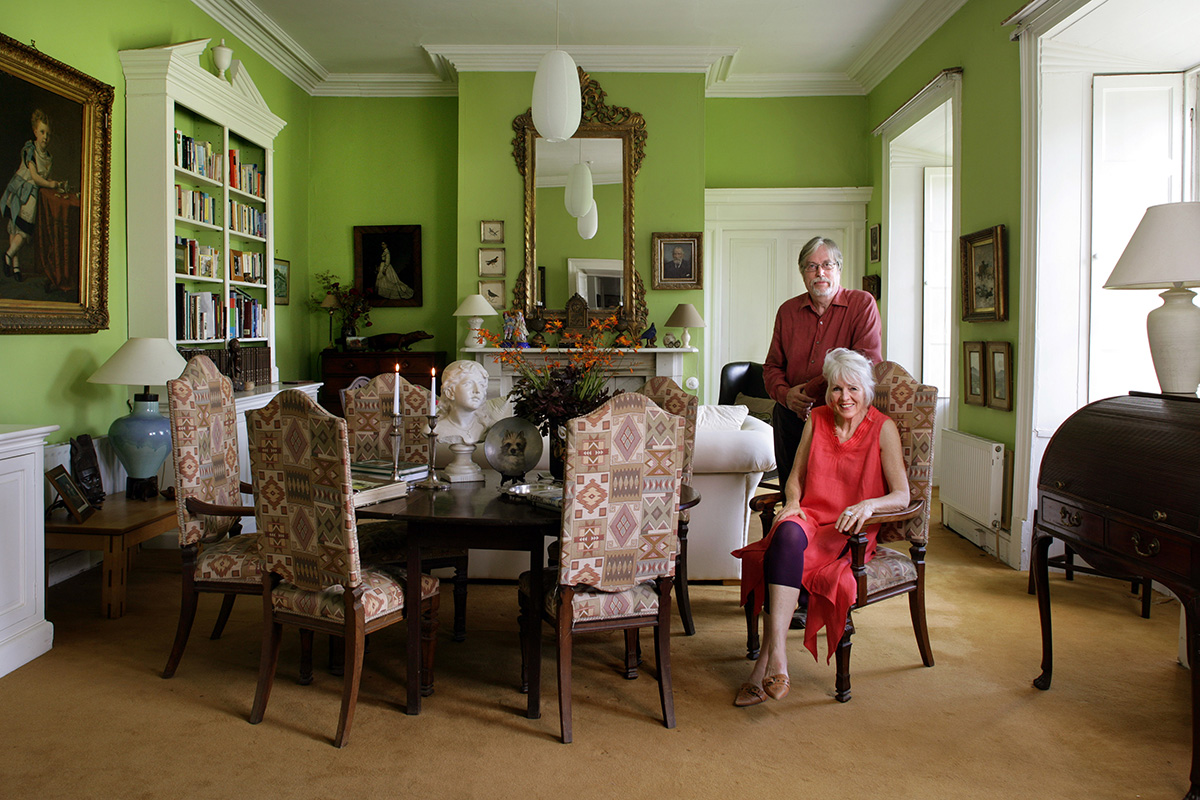 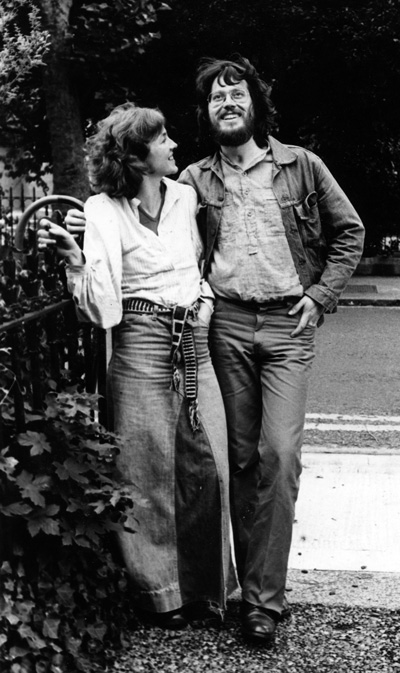 It all happened really quite slowly and naturally and it must be said a bit chaotically!

One day we were making, libraries customised kitchens and chapels; the next minute we had a large house with all the birds having flown the nest, and a business landscape that was radically altered. What to do?

Well in London with said “birds”, a plan was hatched (terrible pun-sorry!). Pop up supper clubs and guerrilla restaurants were all the rage. A very exciting idea and one we thought we might be able to copy. Dave and I have always liked good food, parties and good wine.

After a couple of cookery demonstrations and wine tastings we decided to launch the Posh Nosh Club. We had a fantastic piece of luck with a friend- Deirdre Mc Quillan; she of the Irish Times- and she wrote a lovely piece. It just captured the zeitgeist & people started coming straight away.

The Posh Nosh Club was where we earned our stripes. We learnt to cook, clean, launder and make people welcome in this funny old house. We’ve now spread our wings and can cater for much larger groups without turning a hair.

We’ve discovered late in life that we are rather good hosts! And get enormous pleasure ourselves, in making other peoples parties, weddings; anniversaries etc go with a bang.

So many people say how at home they feel here. They walk in and are just happy to curl up on the sofa in the drawing room or wander in to the kitchen and see what kind of a storm we’re cooking up in the vaulted kitchens.

It’s funny where life takes you and it’s certainly given us a new lease of life.
I secretly think the old house, and any remaining former residents, really rather approve of all the shenanigans.

Our Motto “On mange bien Ici”

A History of Durhamstown Castle

The present Building dates from this time.

First known owner was a Mr Dorram/Dorream. From which the Castle gets its name. The Dorreem family are recorded here in 1511 by Christopher Cusack in “Gentlemen of Meath.

According to Historian Tony Coogan, during this period, St Mary’s Abbey was confiscated under Henry V111; Durhamstown Castle was appropriated for the Protestant Bishops sometime around this period of upheaval. 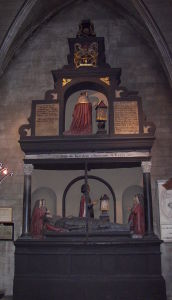 The Bishop of Meath, Thomas Jones, who resided in next door Ardbraccan, at this time, owned Durhamstown Castle & we know from the records, that he left it to his son, Lord Ranelagh, Sir Roger Jones; who was Lord President of Connaught.

The Bishop of Meath, Thomas Jones, was witness & reporter to the Crown on negotiations between the Crown Forces & the O’Neill’s. He was known to be close to Robert Deveraux, The Earl of Essex – Queen Elizabeth’s lover. (Later, executed for mounting a rebellion against Her.) Letters are written – copies of which are in the National Library – from Deveraux to the Queen both from Ardbraccan & Durhamstown (“the Castle nearby”).

Roger Jones, 1st Viscount Ranelagh (before 1589 – 1643) was a member of the Peerage of Ireland and lord president of Connaught. He was Chief Leader of the Army and Forces of Connaught during the early years of the Irish Confederate Wars. In addition to Viscount Ranelagh, he held the title Baron Jones of Navan.

Jones was the only son of Archbishop of Dublin and Lord Chancellor of Ireland, Thomas Jones, and his wife Margaret Purdon. He was knighted at Drogheda on 24 March 1607. In 1609, he married Frances Moore, the daughter of Sir Garret Moore, eventual 1st Viscount Moore of Drogheda. Jones was a member of the Parliament of Ireland for Trim, County Meath from 1613 to 1615. In 1620, he was named to the privy council of Ireland. He was the Chief Leader of the Army and Forces of Connaught and was Vice President of Connaught from 1626.

In 1608 his father became involved in a bitter feud with Lord Howth, in which Roger also became embroiled. His reference to Howth as a brave man among cowards was enough to provoke his opponent, a notoriously quarrelsome man to violence. In the spring of 1609, Jones, Howth and their followers engaged in a violent fracas at a tennis court in Thomas Street, Dublin, and a Mr. Barnewall was killed. The Lord Deputy of Ireland, Sir Arthur Chichester, an enemy of Howth, had him arrested immediately, though he was never brought to trial.

On 25 August 1628, Jones was created Baron Jones of Navan and 1st Viscount Ranelagh by King Charles I. He was made Lord President of Connaught on 11 September 1630 to serve alongside Charles Wilmot, 1st Viscount Wilmot.

Jones was killed in battle against Confederate forces under the leadership of Owen Roe O’Neill in 1643.

An Uncle, Colonel Michael Jones, was the military Governor of Dublin at the time and supported Cromwell’s landing at Ringsend, after the Battle of Rathmines. Troops assembled at Durhamstown to fight on Cromwell’s side. When they marched on Drogheda they laid the place waste & murdered all before them. They brought the severed heads of the Royalist Commanders to Dublin. The Jones’ generally seem to have been a bloodthirsty lot; & were known to be unrelenting in their enforcement of the new Credo. Michael Jones even had his own nephew executed. Roger Jones’ son, Arthur was also embroiled in huge controversy when, as Chancellor of the Exchequer, he was supposed to have diverted all the taxes to pay for the King’s Mistresses! 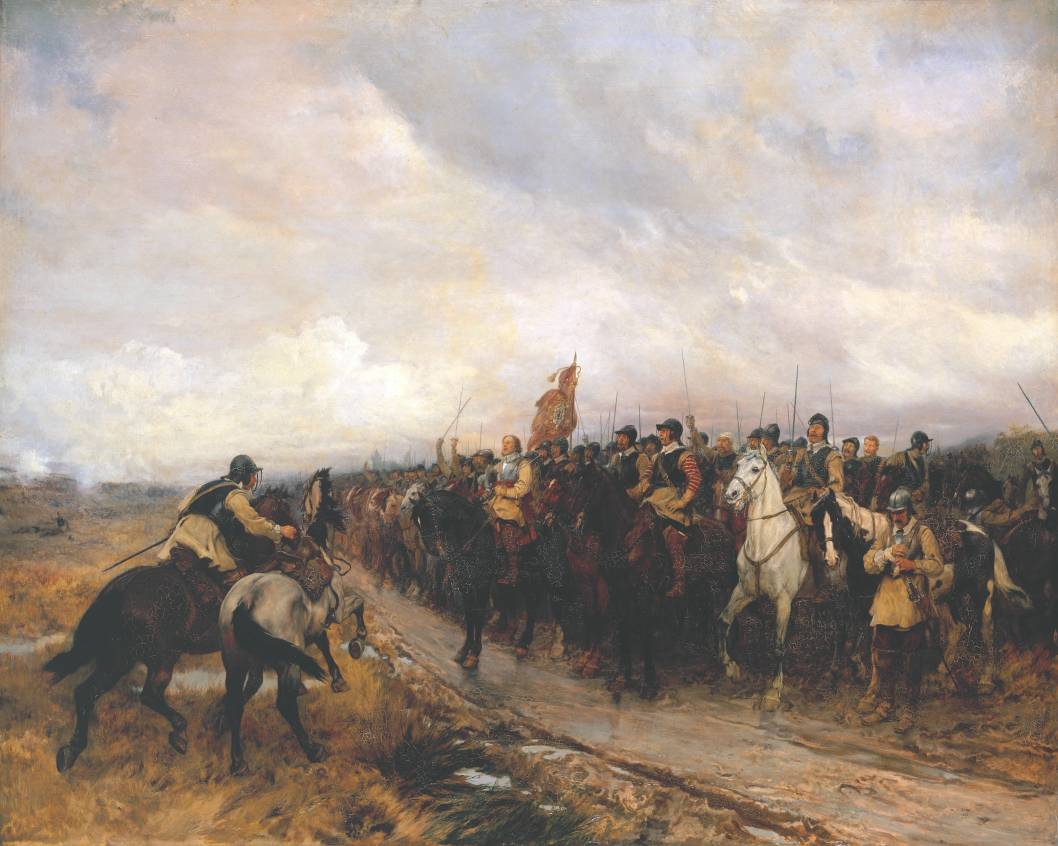 From this time onwards we think the Thompsons lived here. One of the Thompsons was said to have died from septicaemia as a result of an apoplectic rage caused by his Irish labourers refusing to knock down the Church of Durhamstown. He is alleged to have grabbed the shovel & attempted the work himself ; only for the shovel to bounce back & bury itself in his leg, or in some recordings it hacked off his leg; which subsequently became septic & “he died miserably from his wounds” But the stones & spire were taken to build Ardbraccan Church. 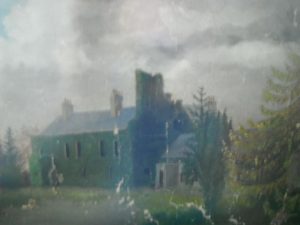 One of the Thompsons married a Roberts from Oatlands just at the back of Durhamstown, & they lived here up until 1910. A couple of years ago Janice Roberts, from America, called to the House but we were out!! Luckily Ella, a neighbour realised the importance of it & arranged for her & her husband to call back. We had a fascinating afternoon going through old photographs & records & tramping quietly round the nearby graveyards with them, filling in the blanks. She promised us a photograph of an oil painting of the Castle intact. Her grandfather lived in Durhamstown & later he sold it, taking some of the furniture & artefacts to his house in Dalkey, called Hendre.

We – Sue (Sweetman) & Dave Prickett buy Durhamstown Castle. And we have been working on it ever since! We have re-roofed the entire Castle & the majority of the Buildings in the Yard. It was in a ruinous state when we bought it.